The discipline of Whipcracking is sports originated from rural areas of American cowboys, cousins Australians (stockmen), the gauchos of the pampas to finish the Cossacks of the steppes.

Prerogative of the sport is to use the whip to make formidable companies.

Although it is known only to employees in the sector there is no person in the world, even if not consciously, has witnessed some of the feats from the world of Whipcracking. Just think of some numbers performed by trainers or circus performers, or in some cinematic scenes in which objects are grasped and carried away to pop up multiple succession.

The Whipcracking does not require great expenditure of effort it of money (except for the purchase of a good whip) being viable is “outdoor” and “indoor”. In the first case, the ideal place is the lawn (not wet) and have to avoid rough surfaces such as asphalt, soil etc … that would ruin irreparably whip. In the second case, the place is a gym because you need a lot of space in length, height, and width to practice several performance.

For the first time, to the uninitiated, it is advisable to use protective glasses to avoid inconvenient to obtain injury. 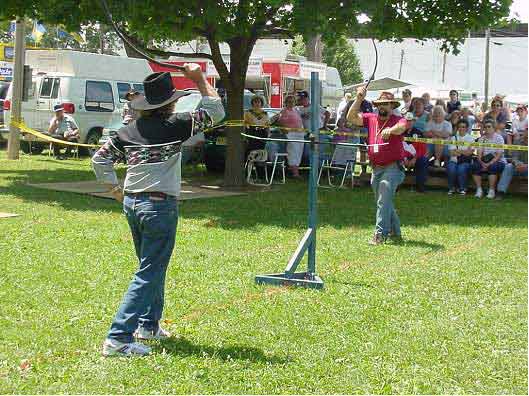 Basically, the models used are three:

The Stockwhip, used primarily in Australia, is characterized by a long handle from 40 to 60 cm on which is fixed the whole body. It ‘s very handy, lightweight and easy to control.

The Bullwhip is the whip more celebrated and widespread, has a handle of 20 cm and a weight greater than the first and requires some experience in using.

The Targetwhip, instead, represents the exact compromise between the two, from the first has inherited the weight and balance while from the second shape. It has a handle between 30 and 40 cm.

The choice between the various models depends on what will be done. For precision work such as turning off cigarettes, hit targets at a distance or multiple execution of the Pops TARGET WHIP is ideal.

The stockwhip and the bullwhip are, without distinction, indicated for the execution of multiple snaps, for the wrapping (windings) or for targeting generic.

Another element that should not be overlooked is the exact length of the whip. Keep in mind when reading the following that 1 foot (1ft.) is equivalent to about 30cm.

As well as in golf where for the execution of a shot you choose the right number of the bat in Whipcracking can be decisive is the model of the whip used but above all the length. Stock and bull / whip target have different metrics: the measurement of a stock does not include either the handle or the fall but only the body length of wires (as in a stock whip from 6 ft, measurement refers to the body only or braided thong) (see illustration). The measurement of a bull or a target whip extends from the handle until the end of the braided body (thong) excluding the fall (see illustration).

For the implementation of wrapping and cracking the preferable length extends from 8 to 12 feet.

Targeting instead the range used varies from 5 to 7 feet max.

Targeting: includes everything which is aimed at the target precision, such as turning off cigarettes, hit apples, cut spaghetti, pull out handkerchiefs from his pocket, and even uncork beer caps!

Wrapping: consists substantially in the windings at a distance and can be combined with the targeting (one thinks, for example arduous number with which it is wound a base placed under a bottle and the subsequent subtraction of this from the same bottle without, however, make it fall) .

Cracking: covers all modes of snaps you can do with one or two whips at the same time, for example multiple pops, pops in several locations (front, side, in Wheeling, etc …).

(NB: the three specialties can be combined at the same time).

These form the basis of whipcracking but prerogative of the sport, is the total absence of standardized specialty. In fact, a lot depends on the creativity and talent of each performer to invent new numbers. Before I get into the explanation of how to calculate the distance to the target I think it is only right to say a few words about what I believe to be the basis:

The correct way is with the palm surrounding the junction of the handle and the thumb lying along the handle that ensures a good feeling and better control.

For the making of the film “Raiders of the Lost” actor Harrison Ford before filming was indoctrinated by a certain Randall to learn the ABC of the whip in order to give some credibility to the viewer even more cunning .

In the first scene of this movie, you can see the exact appeal (when Indiana Jones, turning quickly disarms the guide that he wanted to shoot behind). 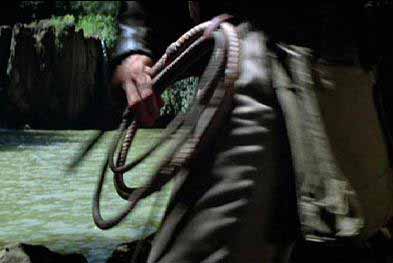 THE FOUNDATIONS OF POP – MOVEMENT AND CRACKING GENERIC

The crack is generated by the combined movement of the arm and wrist this kinetic energy is spread along the entire length of the whip producing the snap that has been demonstrated occur when the ends of the hose exceeds the sound barrier.

What I am going to explain will learn some tricks to make formidable prowess but it is necessary to point out right now that will not be the magic formula, much will depend on your own tenacity. So do not despair but above all do not rush.

First you need to practice in a large space, making sure that anyone near your long haul, to begin to “trust” with the tool in order to understand its flexibility, responsiveness, and the rate of return of ‘end (focus on eyes).

To be able to crack a whip (company apparently easy) it is important to learn from the outset to use the wrist and not the arm.

The first step is to create a fluid movement driven primarily by the wrist. A good exercise to sense the dynamics of the movement and the subsequent pop is to deploy the whip to the ground throughout its length and then bring it back and, when your arm goes behind the axis of the leg, with a sudden movement pull it out again. This will cause a backlash and then pop.

You have to remember that for the whip snaps you should always create a net recoil (think something such as before and then suddenly drops salt) is at that point that generates pop or as I usually call it, breaking point.

Other form of pop, a bit ‘more complex, is to lay the whip with your arm slightly behind the axis of the leg, then bring it forward by raising it from the ground to make a wheeling and push it back and then immediately move forward. Ffor understand this better consider the movement of the arm that makes a batter of volleyball or tennis which raises the arm until it is behind the axis of his body.

HOW TO DETERMINE THE DISTANCE FROM TARGET – TARGETING

For the year of targeting is necessary to have a shelf more or less adjusted to the height of the shoulders, fixed to the left or right side of the floor of a bar which ensure a rod that can trattenereun target (eg, paper cup, pen) . Place a sticker that serves as a reference directly to the ground at the shelf. Measure the length of your whip, taking into account the extension of the arm. Place a sticker away from the first to the length measured. So settle at the adhesive positioned with the legs slightly apart. 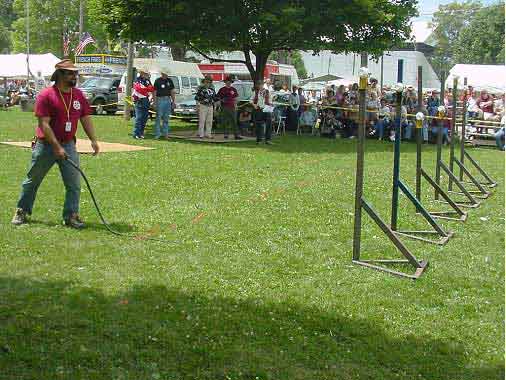 Move the whip in a manner perpendicular to the target so that its end strikes the rod on which is fixed the object to be centered. This is roughly the distance required to maintain option to reach the target placed at the front of your shoulder.

E ‘preferable for the first few sessions use a long bullwhip 5-6 feet (180cm measured from the handle until the end of the braided body, thus not considering the length of fall and crackers).

I conclude with one last tip: the target must be positioned in front with respect to the arm and not the occhi.E, about eyes, you must be always cautious mind that you are not using a toy …