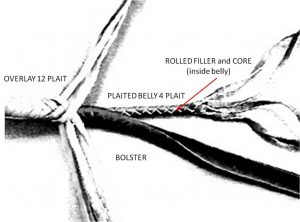 The construction of a whip-style Australian is a long process that requires a lot of patience and precision. The end result is the result of a process artisan developed through the succession and the alternation of several layers of skin used from the inside outwards.
When it comes to parts of a whip or bullwhip whether a stockwhip or snakewhip must always distinguish between the external and internal parts.

The image shows in great detail the section inside and outside of a traditional whip Australian built in 5 layers with an outer coating in 12 plait.
From the inside can be seen the succession of layers:
– Rolled filler and core
– Belly from 4 plait
– bolster
– From 12 plait overlay.

In the presence of a whip with a “double plaited belly” the sequence would continue with a further layer of belly and bolster for a total of seven layers.

The inner part plays a role nerve on the final product, representing the skeleton and musculature of the whip
What distinguishes a good whip to poor is given by both the quality and quantity of leather used, but especially by the way they work in the same building.
Poor use strips of leather whips rolled up or even to construct the string ‘”soul” (core) on which the outer braid directly (overlay) thus creating a whip of only two layers. This implies low resistance and very little elasticity if one keeps in mind that the best models they have between seven inner layers of skin!

The handle is the handle of the whip on which is fixed the core. Generally is formed from a bar of iron or wood or glass resin (in the case of stockwhip) with variable length from the 20 to 60cm depending on the type of model (bull – stock – Target)
The Core is exactly the “heart” of the whip, which is the core on which it is built. Can be formed from a strip of skin triangular wound on a core (fillers) so as to form a cone or from different strips determining and influencing the entire tapered shape on which will be developed later the construction of the whip. Alternatively the core can be used a mini interweaving. In particular models the core can be filled entirely by lead shot to increase the weight of the whip, and greater ease of snap (shot loaded core).
The Belly, is the centerpiece of the internal construction of a whip, is generally constituted by 4 or 6 strips woven directly above the core. This phase unavoidable increases the weight and the thickness of the whip contributing to a better response in terms of accuracy, elasticity and resistance. In the models poor belly is replaced by strings or strips of leather wrapped, this mode does not provide the long elasticity and resistance typical of the best school in Australia.

The Bolster is a strip of skin that acts as a sheath covering entirely the belly woven. Its function is to increase the weight and prolong the tapered profile of the whip. 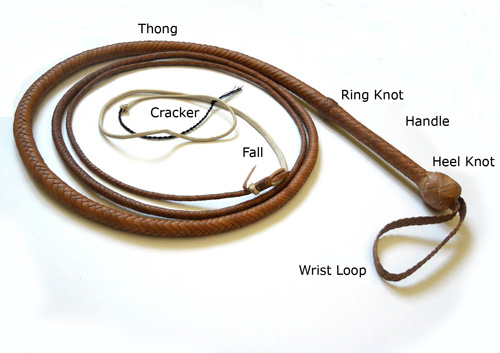 Unlike the inner the outer part in addition to increasing the thickness and strengthen the tonicity of the final whip plays a role of finish on the final product.

The Overlay is the outer covering of the whip made of several strips of leather woven in “Herring Bone Pattern” (herringbone).

This type of pattern can be realized starting from a number of 8 strips. It is usually woven in 8, 12, 16 strips until you get to 64 in some cases but only for decorative purposes. The standard number employed is 12 strips which decrease along the length of the whip until arriving to 6.

The Hand Strap is simply a kind of lace woven about 15cm long (flat or tubular) function to anchor the whip on the wrist, the seat or anywhere else.

The Hell Knot and Knot Ring nodes are woven on each end of the handle.

The Knot heel besides being a decorative element, balance and facilitates the handle of the whip. The Ring Knot provides (in bullwhip and targetwhip) to reinforce the transition point between the handle and the flexible body.

The handle is the handle, a metal bar (or wooden) semi or fully covered by a network whose length can vary from 15 to 50cm depending on the model of the whip.

The Thong is the entire body of the whip ie the flexible section as well as the most important part.

The Fall is a thick leather strap with square section tapered or cylindrical maximum 90cm long (3ft.) with an initial width of 5/6cm fixed on the thong.

The Cracker (or Popper) is the element that determines the crack (cracked), ie a cord twisted 20cm long with a bow at the end. It can be made of nylon, synthetic fibers or leather.
THE RAIDERS BULLWHIP – X-ray of a Legend

The “Raiders Bullwhip” is the exact replica of the whip created by David Morgan in the 80s and used in the famous Indiana Jones trilogy.
The Raiders Bullwhip presents the overlay braided in 12 strands of kangaroo leather braided in two distinct ways.
In the handle area the overlay was braided in diamond pattern where each strand goes under one and over one sequence.
The thong of the whip was made in the classic herringbone pattern in the sequence under 3 over 3 sequence.
Two Turkish knots made by single strand of kangaroo leather determine the handle area:

The wrist loop, is a leather loop braided in 6 strands attached directly below the heel knot.

The wrist loop is one of the characteristics that give to the  whip the Indy Look!!!

The wrist loop can also serve as a handy strap for hanging, but only momentarily, the whip.

The fall, about 75cm long, have a round and tapered shape, It was made in whitehide. At the end of the fall was knotted the black nylon cracker.
The Raiders Bullwhip is perfectly balanced to ensure a proper handling, the junction point between the handle and the body of the whip is strongly reinforced in all the inner layers in order to ensure solidity, response and durability.

LAYERS OF THE WHIP

The “Raiders Bullwhip” is made up of 7 inner layers assembled in succession: 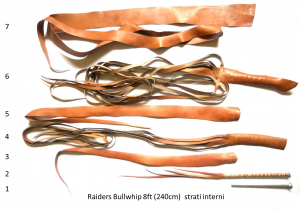 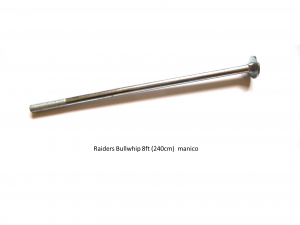 The Filler core wrapped directly on the handle has the purpose of protecting the successive layers from direct rubbing. 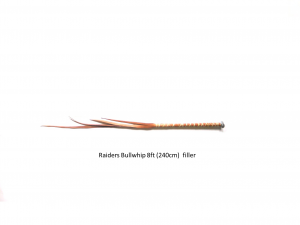 The Core is the “soul”, the core on which is built the whip. It ‘responsible for the final tapered shape of the whip. 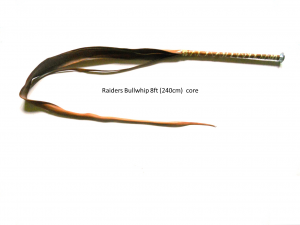 The first braided belly is made of four strands that compressing and wrapping the previous layers of the leather contributes to the creation of the musculature, of the weight and length of the whip. 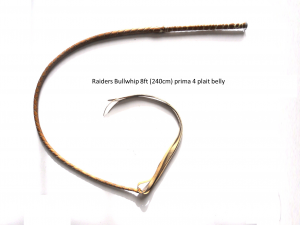 The first Bolster is a long and tapered strip of leather that wraps the inner layers. 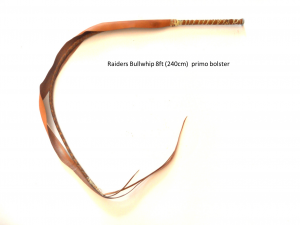 The bolster increase the weight and length of the whip without significantly altering the diameter of the final whip.

Again the second braided belly is made of four strands that compressing and wrapping the previous layers of the leather contributes to the creation of the musculature, of the weight and length of the whip. 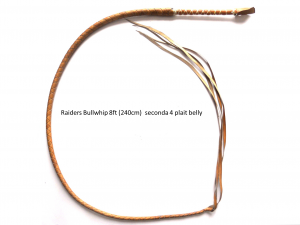 Again the second Bolster is a long and tapered strip of leather that wraps the inner layers. The bolster increase the weight and length of the whip without significantly altering the diameter of the final whip. 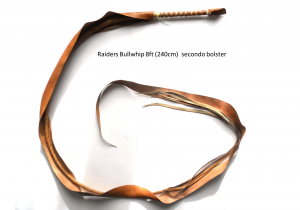 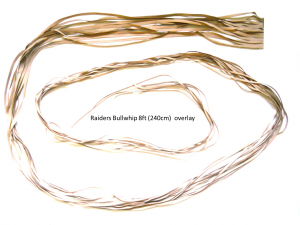 The Overlay is the external braid of the whip. It’s was made  of 12 strands of kangaroo leather finely tapered gradually degrading until the last point in only 6 strands. 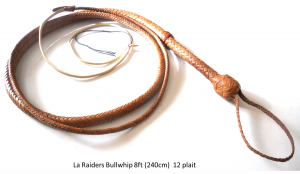 Dear friends, during the making of this  the last time I thought: “ I wonder how many times my hands and my wrists repeatedly make the same movement …”

this my observation has generated figures, calculations to describe in terms of the amount of skin used, cuts, braids what is involved in making a whip and in this case, a Raiders Style 8ft.

What came out is a bewildering series of numbers that gave me the inspiration to find 3P in the main ingredients in the whipmaking:

Gio
Ps: I prefer not to extend these data to all the whips made so far!!! 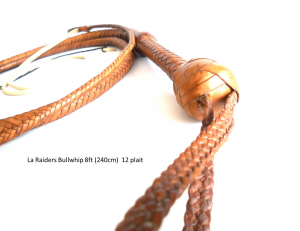 Leather cut to the making of the set: 61mt and 78cm

Braided Leather: 56mt and 98cm
(two plaited belly + overlay + loop + knots)
Now comes the funny part !!!
Below I counted the number of plait of the two internal belly and overlay distinguishing:
Windings – helical motion of a single strand of leather around the body of the whip.
Crossings – superimposition of a strand on another strand to create the famous herringbone pattern.

After the countdown we go back to basics: 10' Raid

My whipmaking countdown continues. After the last

Have a good start to the week, everyone! My whipma

Having published the latest 7ft now it is time to

Good morning everyone! If I had to sum up my year

A flaming Red Signal Whip 3ft 12plt made so at the

Here a 7' ready to go in Finland #giocelesteleathe

Here a 7' matched pairs ready to go in Norwalk, CT

This website uses cookies to improve your experience while you navigate through the website. Out of these, the cookies that are categorized as necessary are stored on your browser as they are essential for the working of basic functionalities of the website. We also use third-party cookies that help us analyze and understand how you use this website. These cookies will be stored in your browser only with your consent. You also have the option to opt-out of these cookies. But opting out of some of these cookies may affect your browsing experience.
Necessary Always Enabled
Necessary cookies are absolutely essential for the website to function properly. This category only includes cookies that ensures basic functionalities and security features of the website. These cookies do not store any personal information.
Non-necessary
Any cookies that may not be particularly necessary for the website to function and is used specifically to collect user personal data via analytics, ads, other embedded contents are termed as non-necessary cookies. It is mandatory to procure user consent prior to running these cookies on your website.
SAVE & ACCEPT