Both the model employed by Anthony Hopkins and Antonio Banderas are available. 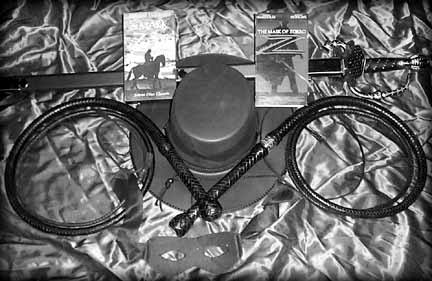 Don Alejandro Murrieta model: this whip is mainly used by Antonio Banderas. It’s available with or without plaited loop on the base of the handle.

Don Diego De La Vega model: this whip is mainly used by Anthony Hopkins. It’s adorned by a silver ferrule at the top part of the handle. It’s feasible to personalize it with bespoke engraving

I’m very proud to show you: “The Don Juan de la Celeste” my personal tribute and interpretation of the Zorro’s whip.

You can see the full video review on:

Thanks again to Robert Amper, for this great review as well.

“Differently than Indiana Jones whip that however has always the same specs such as: Bullwhip with a short handle and braided loop at the base of the handle, doesn’t exist a typical Zorro’s whip because it was always different in terms of style (stock whip, bullwhip sometimes snake whip), shape and length in every movies was shooting from the first of ‘900 till nowadays. So doesn’t exist a typical Zorro’s whip but as many whips as Zorro’s movies.

The only thinks we know is that a long black whip and that it’s enough.

The Zorro’s whip isn’t not a whip But a whip philosophy.

It’s like a sort of tribute where every whipmaker interprets for this extraordinary character. So this whip will be only my personal interpretation and tribute to Zorro and his trusty whip. The long part of making doesn’t was making the whip in it self but choosing the patterns of the overlay and the right pattern of knots. My goal was make a whip that was the combinations of Hispanic (Andalusian) and Californian and Mexican influences.

For this reason I decided to give the name to this whip:

The whip is 6 ft long with 30 cm of handle and the overlay plaited with 16 strands, dyed by hand ending to 8 plaited point.

Gaucho Braid and Short Harringbone braid ( under two, over two ) or eight – seam braid. I also decided to add a braided wrist loop plaited in 8 gaucho braid which it symbolizes the Zorro’s cloak. So from the wrist loop to the and of the handle we have:

The floreal ferule is perfect for a Zorro style whip because the floral motifs engraved on the ferule refer to the Andalusian fantasies adopted by the rich families of the Californian nobility typical of that historical period.

Due to the amount of photos taken, I tried to summarize the most interesting steps of the making.
Here below some pics.

A short but incisive video of my 7ft Don Juan De La Celeste made for multiple world record holder Adam Winrich. Here we see it in action in his very skilled hands